In July 2020, I had the opportunity to conduct a training about Damascus steel.

The course was aimed at members of the Association of Polish Blacksmiths. As the audience was very experienced blacksmiths, I presented the topic of shaping a pattern on the surface of Damascus steel. We set the bar very high at the very beginning. We planned to make a knife where the Damascus created on the blade will be arranged in the form of stylized flames coming from the blade towards the back. The inspiration was the image of a car with flames on its fenders.

The whole course was divided into several stages. The first stage was a theoretical lecture where I tried to explain how we can influence the pattern of the resulting damascus. I explained the basic techniques and issues related to it. The second stage is the forging of a large piece of damascus. The main idea was to achieve a large piece of damascus with the same pattern throughout the cross section.

In the third stage, the piece of steel was divided among the participants. Then everyone independently shaped the knife.

This operation was successful thanks to the host of the meeting, Adam Stachowicz, who efficiently forged the basic bite of damascus. It was a 4 kg bar, far too large for manual work. Most of the operations were performed on a jackhammer and a blacksmith's press. Making one large piece on blacksmith machines allows you to make an even and repeatable pattern. However, it was a difficult operation, and perhaps even boring for uninitiated. To achieve the desired effect, a large piece of steel is folded, bent, crushed and cut many times, only to repeat the operation again.

During these operations, great precision and patience are required. Too many or too few folds may destroy the intended pattern. The same thing happens if we make a mistake at one stage. Another difficulty during such works is achieving the repeatability of the pattern along the entire length of the material. Forging must be very precise so that each piece of damascus has the same pattern.

To avoid mistakes, all stages have been drawn on the boards. The blacksmith's work was performed by Adam Stachowicz. Thanks to Adam's extensive experience, it was possible to obtain a solid piece of damascus. I, on the other hand, supervised the correctness of the individual stages of the operation.

The finished material in the form of a square bar was ready the next day, before lunch. The material was divided between the participants and everyone had the opportunity to make a knife on their own.

As a result, the intended goal was achieved - a knife with a drawing of stylized flames extending from the blade towards the back.

Auction of the knife
Auction to help the famili of Marcin Manikowski "Gas" who tragically died.

The first forging of a bulat steel on a water hammer.
I had the great pleasure of accepting the invitation from the Water Forge in Oliwa - Gdańsk Museum. 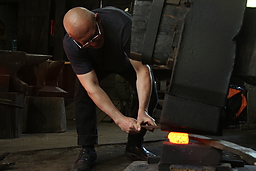